Bloomfield, Indiana is one of the state’s largest but most sparsely populated counties, and the Shawnee Theatre is one of its best kept secrets. For more than sixty years, this rural organization has served its community with a high quality professional theater series each summer.

Arts Midwest spoke with producing artistic director Bretteney Beverly and board president Jack Terrell about how the theater has thrived through adjusting to community needs, the challenges and joys of producing theater in a rural area, and how they’ve been working to keep creativity and inspiration flowing during a pandemic and beyond.

Bretteney, it’s been a really difficult year to step in as producing artistic director. Can you tell us a little bit about your leadership and strategy this year?

Bretteney Beverly: I always try to keep in mind that it has been a challenging year and continues to be for all of us. So my strategy has been to lead with compassion, first and foremost, and continue to look for ways in which our theater could be of service to our community at large. 2020 would have been our sixty-second season. Until this last year, we had not had a summer without a season.

Jack, could you tell a little about how Shawnee got started and what it means to the community?

Jack Terrell: In its early years, the theater was operated out of a barn. In 1979 we built our 280-seat theater. A lot of what we do is fundraise to keep the building going, but the thing that keeps Shawnee going is the fact that our town is small.

There are fewer than 2,500 people here. People my age raised around here have [watched] a lot of [businesses] go. So I have made it a pledge, and I think over the years, the townspeople have made it a pledge that the Shawnee is one thing they’re not willing to let go of.

It helps that we offer something for everyone. The local high school uses our theater one month out of the year to stage their plays and we see a lot of alumni come back each summer. I think it’s because you can be exposed to just about any part of theater you want. We do all of our set building; we’ve got a huge costume loft. You can run the box office, you can do tech, you could be an actor. We do musicals. We do comedies.

What are some of your biggest challenges?

Jack Terrell: I always say we were Indiana’s best-kept secret, but we can’t be secret anymore.

What is different about doing theatre in a rural area? And has that changed your approach?

Jack Terrell: We really shouldn’t exist by conventional wisdom. I mean, you are looking at a town of 2,500 that keeps getting smaller instead of getting bigger; things keep closing down. They put in a new interstate about two years ago that’s about eight miles south of town, making it easy to get into Bloomington. There are lots and lots of theaters within twenty to thirty minutes. So we have to come up with ways to keep our people here.

Bretteney Beverly: I am sure many people will say that, even if you are in an inner-city or a downtown area, producing live entertainment, and specifically theater, has its challenges. Our audience members and patrons keep us on our toes, specifically when it comes to what they would like to see on stage. I love when patrons come up to me after performances and say things like, “We love that,” or, “We love that performer,” or, “Have you all ever thought about doing this show?” It’s about balancing what our patrons want to see and the things that we think they will be interested in but maybe didn’t suggest. We have been open for over sixty years, and that is a testament to the community, that is a testament to our patrons who keep coming to the theater. Being in a rural area hasn’t necessarily made me change my approach, but it made me step my game up for sure, and I accept the challenge.

Can you tell me a little bit about the impact of COVID-19 on the theater?

So, what we’re doing now is strategizing. We’re running a lot of what-ifs. What if we open? And if we do, it may be just a few short shows or a shortened season. So I’m already looking at how I am going to pay my bills? How could I maybe have a winter concert? I think it’s going to take a while for people to get comfortable again going to theaters, so we will have to start looking at phased ways we can do things.

Bretteney Beverly: Everything we have done has been virtual. We postponed our 2020 season but decided that we wanted to continue to do virtual youth camp. It was challenging because we are in a rural area, and the internet is not the best. But the kids that we had gave their all to these camps, and we ended up having two performances.

One of the things we started was a new playwriting initiative to foster and cultivate playwriting in our area. One of our youth, who has been in a lot of our productions, reached out, and we had planned to have a reading of a play that she had written in high school as a project, but it turned into a full-blown virtual production. Our associate artistic director Rakeem Lawrence and I broke the script up and had seven or eight rehearsals, and then we got together and recorded it like a play. There were sound cues, lighting cues, and costume changes.

Bretteney, you are a performer as well. How does that shape your focus?

Bretteney Beverly: My background as an actor shapes everything, including my leadership style and how I approach being a producer. Because of my background and my training, I look at producing from many different perspectives. I know what it’s like to be a performer. I know what it’s like to be that person that’s expected to deliver the end product that everyone has spent time, energy, and money on. It extends to my leadership style as well. I like to call myself a servant leader, asking, “How can I serve my staff? How can I serve my company members, patrons, and community to the best of my ability?”

What are your hopes and dreams for the future of the Shawnee?

Bretteney Beverly: One of our immediate goals for Shawnee is to be a year-round running, professional, regional theater company. Right now, we are producing theater specifically during the summer months, but we would like to continue to produce theater, offer live entertainment, and offer educational opportunities throughout the year. I want to offer live and virtual entertainment theater productions and be a hub for new plays and musicals in our area, cultivating new talent that comes out of the Midwest. I also want to find new ways to make theater accessible for all and develop our youth education outreach programs.

Jack Terrell: What we are trying to do, and we were doing until COVID hit, is making it a year-round theater. We live in one of Indiana’s largest but sparsely populated counties, and there’s one movie theater. I have got the equipment to show movies, and I would like to set that up. The kids in town really don’t have much to do, so my goal is, before I die of old age or get run over by a truck or something, to make it a year-round facility by showing movies. 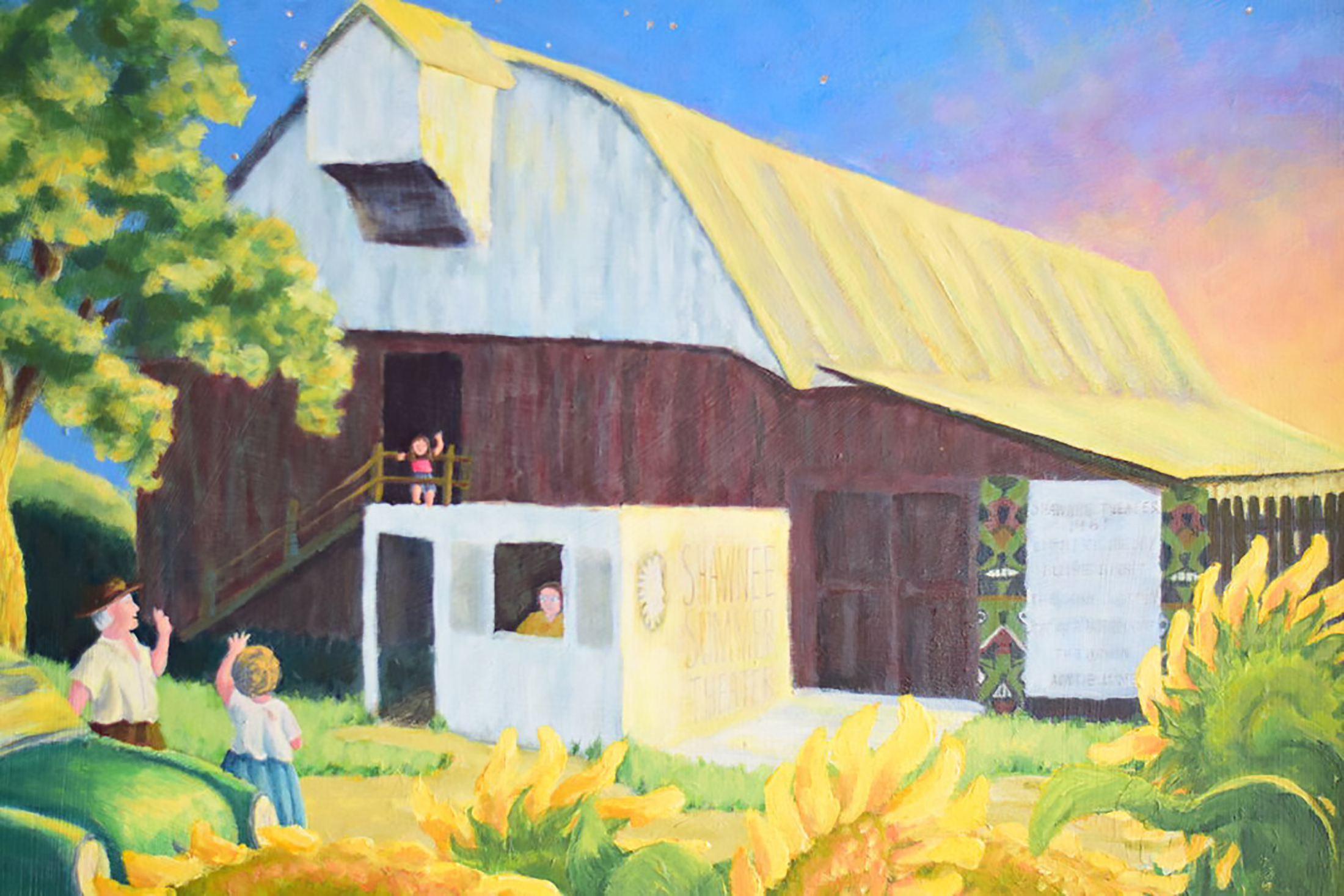 A painting of the theater. Photo courtesy of Shawnee Theater

Bretteney Beverly: A few things. First, the ways in which artists are becoming creative with our work and sharing it with the world. We’ve been talking about that a lot at Shawnee — how we can give artists platforms to showcase their work outside of the four walls of the theater.

We’re also looking at the need to consider equity, diversity, and inclusion in our industry. As a woman of color, a Black woman in this industry, and also a person in executive leadership, I’m seeing changes in our community that are slowly coming. I am grateful for that, and I want us to be at the front end of those changes.

Do you think that your work will change post-COVID? And if so, how?

Bretteney Beverly: Absolutely. It has to change in order for us to stay relevant and for us to stay authentic. I think our industry is changing, and it needs to change. In a way, the pandemic has been a blessing for our industry because it has forced us to face some things that we maybe had swept to the side. That comes down to every facet of the theater: the shows we produce, theater maintenance, it will even affect the seating in our theater.

We are the gem of Greene County. We’re going to stay true to what we do, but we’re going to make some changes, and I think it will be for the best.

The Shawnee Theater of Greene County is a United States Regional Arts Resilience Fund Recipient, and recently received support from the Indiana Arts Emergency Relief Fund. Thanks to the Mellon Foundation, the National Endowment for the Arts, and an anonymous donor for their support of the Shawnee Theater and other rural Midwestern organizations.